The primary method by which scrubbers operate is to cause dust particles to attach to liquid droplets or film, then to remove the liquid containing the particulate from the gas stream.

While many particles will grow in mass by absorption of water, the most significant mechanism for particle growth is contact between dust particles and water droplets or a liquid film. This contact occurs by the following basic mechanisms:

There are two primary methods for contacting liquid droplets with particles. The first method uses a device that takes advantage of inertial impaction. These devices are typically spray towers or chambers, wet cyclones, or venturis (in order of increasing effectiveness). All of these devices utilize acceleration of the flow stream to cause inertial impaction and follow the power-contacting theory. The power-contacting theory in simple terms states that the amount of power utilized in contacting the particles is proportional to the contact efficiency. 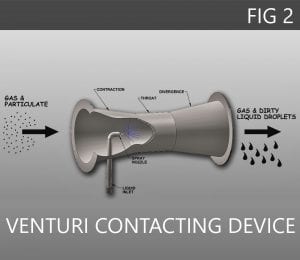 In figure (2) we show a diagram of a conventional venturi contacting device. In the contraction portion of the device, the gas and droplet mixture accelerate as the cross sectional area is reduced. In this section the fine dust particles accelerate more rapidly than the larger water droplets creating a relative velocity between the two. In the throat section, the the particles and liquid droplets are further mixed and allowed to reach a maximum velocity. In the expansion or divergence section, the larger particles remain at a high velocity while the small un-collected dust particles slow with the gas flow as the cross sectional area increases. The success with which we contact dust particles with liquid droplets is a function of the power consumed across the venturi as measured by pressure drop plus the power consumed in injecting the liquid usually as measured as pump horse power. Once the relatively small dust particles are combined with larger water droplets we may easily remove the large dirty water droplets with inertial separators (cyclones) or with other entrainment separation devices.

The second method for scrubbing particulate uses interception as the mechanism by passing the particle laden gas pass through a structure or media that is wetted with the scrubbing liquid. While not as common as venturi and wet wall cyclones, these devices can be particularly effective for the collection of soluble particulate with high efficiency with low power consumption. Figure (xxxx) shows a cross flow Interceptor Series Scrubber. When utilizing interception as the primary mechanism for scrubbing, the amount of surface area of liquid film, as well as the gas path, affects the collection efficiency. Collection efficiency can be increased by increasing the number of interception sites and/or the surface area of liquid film available for contact.

Interception devices are rarely utilized for insoluble particulate due to the probability of plugging or fouling within the media. 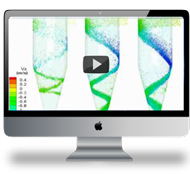 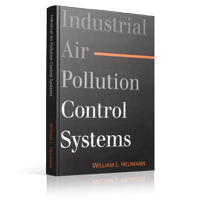